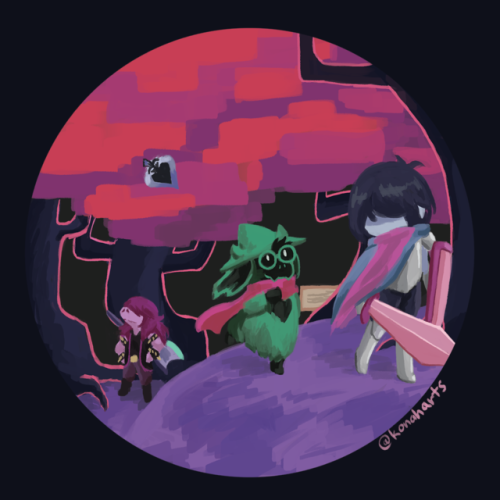 Field of Hopes and Dreams <3 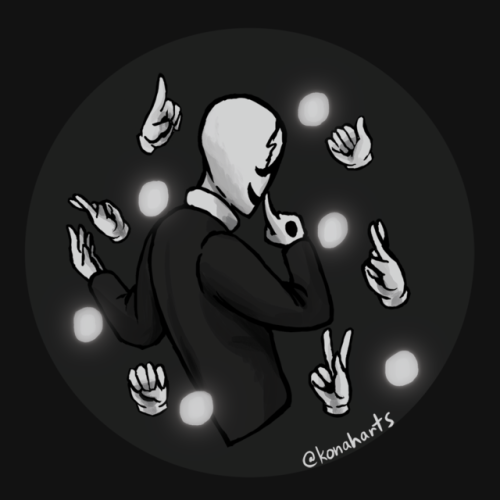 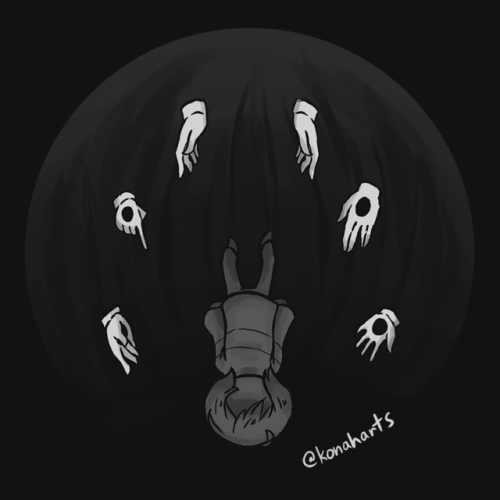 …will now be discarded.

No one can choose who they are in this world.”

*Kris goes inside a chicken restaurant where Berdly works*

Berdly, in a bored tone: “Alright, what’ll it be Kris? The breast, thighs, or wings?”

Kris: “I want the whole thing.”

Berdly: “Damn dude, the family meal? Are you sure?”

Wait no, to make up for my dark Kriselle post here’s a funny thought I had:

Kris: I would literally keep scaring you when we were kids, does this mean you like me?

*cut to a montage of Kris bringing back their scare pranks, asking her after each one, “Do you like me now? How bout now?”*

And just for funsies, imagine a scenario where she catches them setting up their next scare, and she finds a way to beat them to it, succeeding in making them jump, but their flailing away knocks over something she was standing on and she lands on top of them. Awkward pose that has their faces too close. She runs away apologizing, face beet red and in the middle of the night, thinks to herself, still flustered:

Thinking about the angst of liking your best friend since childhood but losing your closeness as tragedy strikes you both.

She loses her sister and you lose your free will. You don’t talk as much anymore out of some sense to protect her, and she starts hanging out with another smart kid instead. It’s for the best.

You notice she’s crushing on the class bad girl (it’s so obvious!) and you hate it. So you want to hate her, but one adventure later, the bad girl comes around to being a good friend. Your first in so long. And it hurts so much more meeting back with your childhood friend only to talk about her.

They deserve each other.

Unlike you, with your parasite.

The next adventure comes. Your childhood friend was kidnapped! You go for the rescue, and get split up along the way. You find her. You’re alone.

And your parasite starts infecting her.

You struggle at first. You know the horrors it’s capable of. She’s a sweet and kind girl, she doesn’t deserve to become a monster!

The one in control suggests

And it’s pushy about being together with her.

And… she’s not fighting back?

What could bring you closer than this mutual burden? What more could you ask for?

And when her smart friend comes along to ruin it.

There’s only one logical option.

You don’t see her for the rest of the adventure.

But you know she’s still under the same parasite’s control when she comes to save you last minute.

She’s still connected to you.

And that makes you so

Happy. For the first time in years.

You all ‘wake up.’ She’s still scared. She wants to believe it was all a nightmare.

You won’t let her.

You show her the watch

And her hope is crushed.

She won’t be yours.

But she will be with you until the end of this sick game.

frisk, Chara and Kris enjoying some pie in waterfall

Kris: Do you think different paints have different tastes?

Noelle: …Why did you say that with such certainty?

Kris: And I need you to be less vague and weird.

Kris: Ooh, somebody has a crush.

Susie: Pfft, I don’t have a crush on Noelle. I just think she’s cool. It’s not like I stay up at night thinking about her.

Toriel: Kris, could you go to the shop and get a carton of milk? If they have avocados, get six.

Kris, coming back from the store with six cartons of milk: They had avocados.

Berdly: Valentine’s Day is just a consumerist holiday that holds no real value other than drive people insane buying heart-shaped chocolates for their significant others and pos—

Kris: I wrote you a poem.

Berdly, already crying: You did?

Ralsei: Kris, we need a plan of attack!

Kris: I have a plan: ATTACK!

Jevil: WHAT IF MAYONNAISE CAME IN CANS?

Spamton: THAT WOULD SUCK SINCE YOU CAN’T MICROWAVE METAL.

Kris: Good morning to everyone except these two.

Ralsei: What are all of these frozen bodies doing here?!

Kris: Honestly, not much.

Susie: Yeah, yeah, I get that. I’m just trying to understand what’s wrong with Kris.

Kris: Hey, do you think I can fit fifteen marshmallows in my mouth?

Berdly: You’re a hazard to society.

Susie: And a coward. Do twenty.

Salt Route AU art that took me forever to finish, but here it is! This AU was dreamt up by @beabigshot! 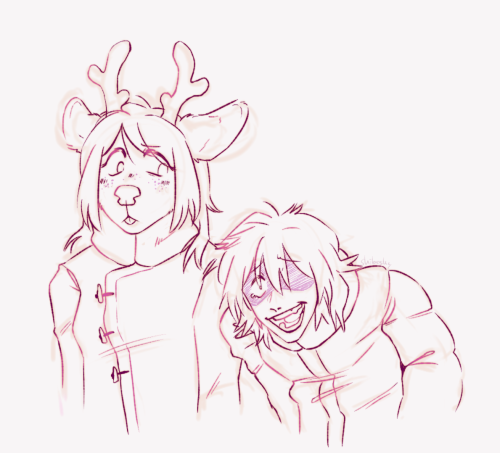