✧ Me? Make a Deltarune OC? I would never- ✧

✧ Some doodles I did before I decided her final design. She was going to be a Tasque Manager knock off at first sdhbcsj-✧

✧ Bonus doodle page I did when I wanted to figure out how to draw him and his different facial expressions!✧

making frozen chicken with my side chick 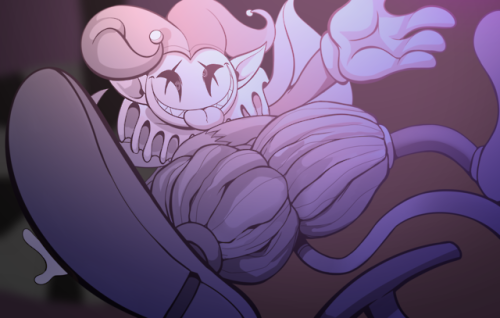 Also very very slowly chipping away at this, if it ever gets finished.

jskahahdjs sorry for not posting for a while, but while i’m trying to fight my art block here’s my first time drawing noelle hajzbdn

Twice, long, long ago, Seam had been loved.

Back then, at least as far as Seam could recall it, the Lightners and the Darkners were not separated. There was, in truth, no Dark World at all – there were only the Darkners, serving Lightners, in their eternal and ever-marching Purpose. And they had known this relationship closer, more intimately, than almost any other Darkner.

Unlike many other Darkners, they could remember having been Made. Stitched and sewed and stuffed with cotton by a woman who looked very much like they did. Yet, although she was their Creator, she was not their God.

Their God was a young boy who, too, looked much like they did, and in the most sacred of all rituals, they were given to him, from mother to child. And, for many years, their God gave them love… if not particularly fondly, compared to the love he showed to other Darkners, Darkners who had lost their Purpose long ago now.

That was, until the Severing. They did not know the details of that day, and could not have remembered them even if they did. All they knew was that their God came to them that day a hollow shell, damaged beyond hope of repair. His right arm, removed from his torso as easily as a doll’s. His mind, a patchwork of memories and thoughts that did not reach a conclusion.

Seam could not say, if they were being honest, if that had been unfortunate or fortunate. They felt selfish for thinking so, but the years after that were the greatest of their life.

Because they were Real.

They were loved so much then that they started to come apart at the seams, so to speak. Many times, it was accidental – it was easy to make a mistake when you had only one arm. Sometimes, it was not – it was easy to break things when your entire world felt broken. But, no matter what, it was still love, and they greeted every expression of it with a sense of belonging and completeness in their cotton heart.

After all, when you are Real, you don’t mind being hurt.

The second time they were loved, it was much the same.

It was long after they were abandoned by their God, much like the other Darkners had either been abandoned by theirs, or would later be when the New Gods, the Knight and the Prince of the Light, disappeared. They had found themselves in a new world, a shadow of the old one both metaphorically and literally, and that had meant finding a new Purpose. Many of the new Darkners that would come would believe that there had always been a Dark World, much in the same way that it was believed that, since nothing comes from nothing, there must have always been a universe, but Seam was already old enough to know differently.

Perhaps that was why, for their new Purpose, they were made the court magician, a direct advisor to the Four Kings of Castle Town, and later to the strange foreign Queen.

And perhaps, for Seam very much believed in such things, it was then fate that introduced them to Him.

art trade for @tyeler-kostlan ! I don’t get to draw hugs that often so this was extra nice to work on

*cough cough* what is this?? Idk- totally not a self ship or anything.. nah- it’s not like I like Spamton. Noooooooo *COUGH COUGH*

Here’s my part of an art trade with @ logicpng on Instagram! Ended up wanting their trash gremlin painting some pipis to resemble Easter eggs. Gotta get that extra $$$

Here’s my part of an art trade with @ jcd.toon on Instagram! Their OC Ginny and Spamton! Cute girly and was quite fun to draw!

Spamton loves his gal but after becoming a big shot he got a bit- stupid.. He doesn’t mean to be a butt but you know. :)

Welp- I’ve been a fan of Deltarune for a while so I guess I should make a persona! Tyeler is the name I go by in the light world but in the dark world I go by Bailey. The reason is because my name was either going to be Tyeler or Bailey. And I think it would be fun to use the name I could have had in the game! Also I give Spamton cookies daily because he deserves it ❤️