<sb> the latest trend in spam subject lines: YOU HAVE BEEN ACCEPTED TO JOIN THE ILLUMINATI

<b> YOUR SMART SO ,,,YOUR NOW ACEPTED TO MENSA CONGRADULATIONS 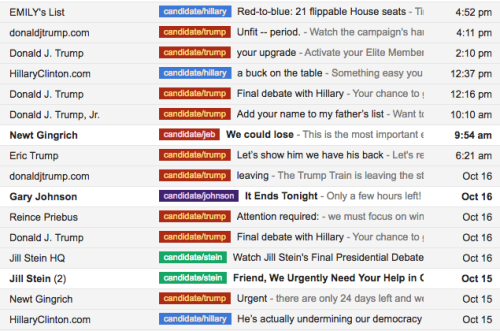 Earlier this week, I wrote a post on MediumaboutThe Junk Mail Candidate:

In February, I subscribed to all the presidential candidates’ email lists.
Since then, I’ve gotten over 1,000 requests for money. Today is the 17th of October, and so far, this month, I’ve heard from Hillary Clinton’s campaign 32 times and Donald Trump’s 53 times. (Carly Fiorina chimed in once in support of Trump, too.)

Sometimes I hear from them many times in a day. “Let’s bug our subscribers incessantly,” the theory seems to go, “so they’ll be more inclined to give us money!”

…So the emails become an interesting lens through which to examine each campaign’s opinion of its supporters. Do they think they’re the type of people who’re driven by hope, or by fear? By sincere human appeals, or by stern orders? By pleading, or by threats? Or like Jeb!, by just being pathetic?

The stated purpose of this was to see if anyone would sell my information to any skeevy advertisers. Some were curious about that element of it, and I’m pleased to say that it doesn’t seem to have happened, generally speaking.

Whathas happened is something I suppose might be expected: when a candidate has withdrawn from the race, their list is sometimes used for other purposes by their party.

For example, once Jeb! was out, I started to get some emails from the Republican Congressional Caucus, asking for contributions to aid various GOP downticket races throughout the country. Once Chris Christie endorsed Trump, messages about Trump began to filter in from Christie’s list.

I guess that is all within the realm of reason. But just today, something else very weird happened.

Let me take you back to September 22. It was a halcyon time, before anyone knew Billy Bush would have a role in the presidential race. I was performing comedy at a festival in Hawaii, and sitting on a beach when I wasn’t doing that. It was also the day after my birthday. I was feeling pretty good.

On September 22, Donald Trump sent me an email, inviting me to come on his campaign plane:

Now, look. Here are some things I do legitimately like:

I have run sweepstakes before, so I know there are rules to them. You cannot require a purchase or a monetary contribution in order to enter a random-draw sweepstakes, it’s against the law.

I know Trump respects the law (after all, he’s the law and order candidate), so, I checked the fine print. Sure enough:

I clicked the second link (“You may enter without contributing”) and was taken to this screen:

“All right,” I thought, “if I do actually win this thing, I will need to prove I am a real person in order to claim the prize.”

So I entered my initials (D J Malki). I go by “DJ” to my friends, you know, it’s a very normal thing. Me and Donald J. both do it.

Clicking “Submit Entry” took me to this screen:

Wait, what? A contribution request? Surely this was a mistake! I was trying to enter without contributing, as the law provides for!

It was no use. Clicking the gray “continue” button only lit up the contribution grid in red. I could not proceed without donating.

“What a scam,” I thought to myself, and closed the browser window. (Then I opened it back up because I had a bunch of other tabs going.)

Phooey! I would never win a trip on Donald Trump’s plane. I would never eat KFC with a knife and fork with the man himself. OH WELL.

I thought about mentioning this EXTREME VIOLATION OF SWEEPSTAKES LAW on Twitter, but it would be too hard to explain. Besides, I was in Hawaii. Forget it.

This was waiting for me in the mail today:

This is…weird. New Republic is not in any way a pro-Trump or pro-Republican publication.

But in NO OTHER PLACE than Trump’s sweepstakes have I ever submitted my name as “D J.” (I lied up there when I said I use it all the time. I just wanted to look cool to you.)

So…I dunno? Maybe it’s some kind of coincidence. What I do know are facts are:

Anyway if anyone wants 2 years of New Republic for the price of one, beep me, I have a hookup. 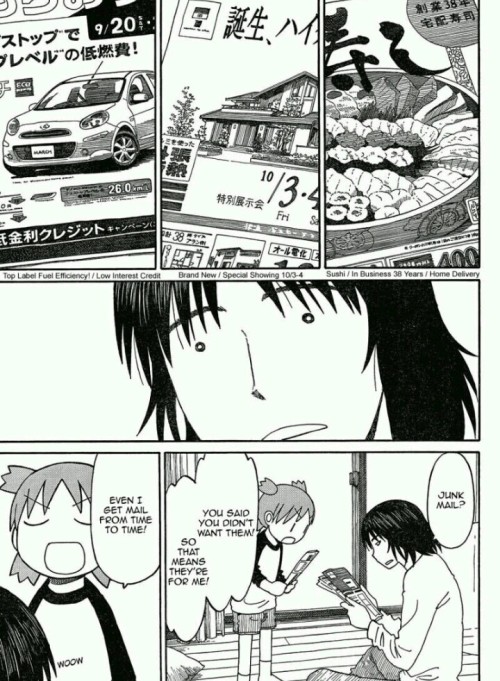