In a study published in the journal Global Biogeochemical Cycles on  May 2, 2016, scientists from the University of Miami (UM) Rosenstiel School of Marine and Atmospheric Science found that the limestone that forms the foundation of coral reefs along the Florida Reef Tract is dissolving at a very rapid rate during the fall and winter months on many reefs in the Florida Keys. The research also showed that the upper Florida Keys were the most impacted by the annual loss of reef.

For this study Dr. Chris Langdon and his team collected water samples in 2009 and 2010 along a 124-mile (200-kilometer) stretch of the Florida reef, from north of Biscayne Bay to the Looe Key National Marine Sanctuary in the Atlantic Ocean, about five miles off Big Pine Key in the Lower Keys. This data establishes a baseline of the health of the reefs, which could then be used for future studies that look at changes along the reef tract.

(Map of the study area. Click here to enlarge.)

The team found that reef dissolution in the fall and winter months is a significant problem on reefs in the upper Keys, where the loss of limestone is exceeding the amount the corals are able to produce in the spring and summer on an annual basis.  The northern-most reef is already net erosional (-1.1 ± 0.4 kg CaCO3 m-2 y-1) and mid-reefs to the south were net depositional on an annual basis (0.4 ± 0.1 kg CaCO3 m-2 y-1) but erosional during the fall and winter. Only the two southern-most reefs were net depositional year-round.

“The reef needs a certain amount of carbonite production every year to stay in place,”  Landgon says.“if it’s in excess of that, the reefs grow. When it reaches zero, they are holding even. When it switches to negative, that’s when they start wasting away.”

On top of supporting most of the biodiversity in the oceans, coral reefs are also crucial for the economies and tourism industries of coastal countries. In Florida, it is estimated that the reefs have an asset value of $7.6 billion, and they support over 70,000 jobs.

The results of this study indicate that parts of the Florida Reef Tract have already crossed the tipping point for carbonate production and other parts are getting close. Moreover, the area has suffered greatly over the last few years due to warmer sea surface temperatures, and heavy coral bleaching episodes that resulted in a significant loss of corals and in the spread of diseases.

Since the data for the study were collected in 2009 and 2010, it is now necessary to conduct a similar analysis to see how the reefs are faring today. Considering that the worst bleaching years on record in the Florida Keys were 2014-2015, it is very possible that the reefs are in a worse state nowadays.

Coral reefs are among the most dynamic and diverse ecosystems on the planet. They provide a safe habitat for hundreds of marine species, along with numerous resources necessary for the economic survival of smaller nations. Nevertheless, ocean acidification is one of the greatest threats that coral reefs face nowadays. It is now necessary to understand the problem, and to act quickly to limit the consequences potentially insuperable if coral reefs were to disappear.

Coral reefs are natural structures essentially built by hard coral colonies. Each coral is an invertebrate animal constituted of polyps. A polyp is an organism made of a mouth, stomach, wall and tentacles used for feeding and defense. Most of the corals are made of hundreds of those polyps, each genetically identical. Each polyp secrete its own exoskeleton made of calcium carbonate. Thus, hard coral species build reefs with the slow accumulation of these calcareous skeletons. Corals are furthermore considered as one of the biggest natural well of carbon on our planet.

The above video shows detailed and close-up shots of coral polyps feeding.

Coral reefs have among the richest biodiversity on the planet, and provide ecological niches to numerous animals that find protection and food within the reef. According to the National Oceanic Atmospheric Administration(NOAA),more than 25% of the world’s marine biodiversity is found around coral reefs, as well as over 4,000 different species of fish.

Corals are also a necessity for many coastal countries. Coral reefs offer a natural barrier against erosion and flooding following strong weather events (hurricanes or typhoons, for example). Furthermore, coral reefs are of an invaluable economical importance, and supply essential goods and services such as food, raw material, water filtration, and tourism. Over 30 million people depend exclusively on those reefs for their subsistence and housing, particularly the populations living on coral islands or atolls (Wilkinson 2008).

It is difficult to calculate the exact monetary value of such an ecosystem, but according to estimations from experts at Diversitas in 2009, the goods and services supplied by coral refs have an average annual value of about $172 billion.

Corals are very sensitive animals, and do not tolerate big changes in their environmental conditions. They now have faced for multiple years various threats, such as overfishing, pollution, bottom trawling, warming sea surface temperatures, or ocean acidification.

It is possible that by the middle of the century, corals become incapable of surviving in numerous regions of the world due to ocean acidification, and that their dissolution will be faster than their rebuilding(Guinotte and Fabry 2008). As I explained in the first article on this topic, the more acidity increases, the more energy is required to form a skeleton, and corals thus become more vulnerable.

In 2008, Clive Wilkinson explained that the world had already lost over 20% of coral reefs. In 2011, a report from the World Resources Institute indicated that 75% of coral reefs were at risk of entirely disappearing. In July 2015, a team of international scientists lead by Dr. Jean-Pierre Gattuso of the Laboratoire d’Océanographie de Villefranche published a worrying studyon the future of our oceans. If we continue with the ‘business as usual’ approach and if the CO2 emissions increase at the same rate, we can expect irreversible consequences on the marine ecosystems.

Without corals, the marine biodiversity will sharply decrease, as it will equal a huge loss of habitat, food and protection for many species. Moreover, the sectors of tourism and fisheries in numerous local and national economies will highly suffer from the disappearance of coral reefs. Finally, coastal regions will inevitably face increased beach erosion,floods, and damages in towns located close to the oceans.

All hope is not lost yet. A team of scientist has already shown that some corals are capable of regulating their own pH levels internally(McCulloch et al. 2012). Moreover, scientists in many countries, like Ken Nedimyer in Florida, have successfully established coral nurseries to grow endangered coral species (see photo), and to insure the presence of numerous and different genotypes within the reef. These corals are then transplanted onto older reef sites, previously destroyed by storms, diseases or bleaching events, so the reef can rebuild. Additionally, scientific research on corals and their resistance to such events continues across the world.

(Photo of Acropora cervicornis trees at the CRF coral nursery down in the Florida Keys. Photo by Allan Bright)

In France, l’Initiative française pour les récifs coralliens (IFRECOR), dependent on the Ministère de l’Ecologie, has been committed since 1999 to ensure the protection and sustainable management of coral reefs in French waters.

Everything in our environment is connected, and it is therefore possible to help coral reefs indirectly in our daily life. Don’t hesitate to check out the Lemonsea article on 5 things you can do to fight ocean acidification. No action is too small. 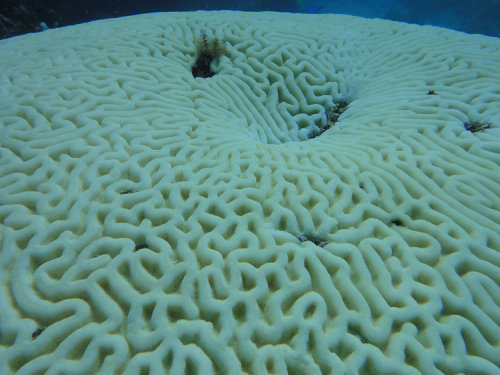 Scientists Are Breeding ‘Super Coral’ to Save Ocean Ecosystems

Throughout recorded history, humans have forced the evolution of select plants and animals. Now, researchers at the Hawaii Institute of Marine Biology’s Gates Lab are using this technique, called “assisted evolution”, to create “super coral.”

Why would researchers, led by Hollie Putnam and Ruth Gates, director of the the Hawaii Institute of Marine Biology, want to breed this strong, resilient coral? It comes down to the impact of climate change on oceanic ecosystems. 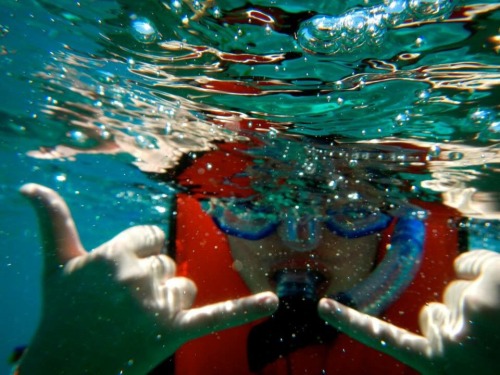 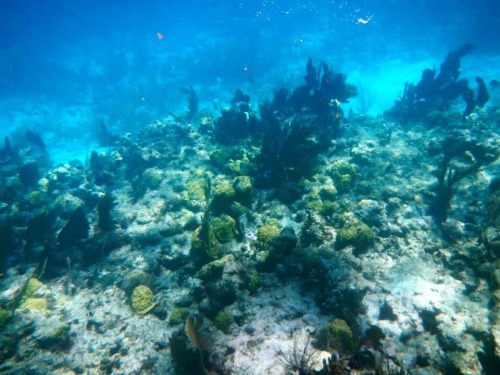 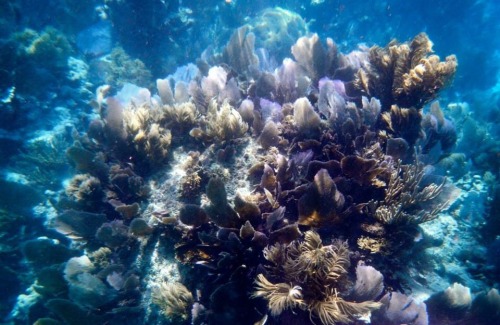 I was going through some old photos and found some pictures from a snorkeling trip I took a couple years ago to Key Largo. It was an amazing to be in a place that is responsible for providing food and/ or shelter to ¼ of all ocean species. The sad truth is photos (like the ones I took) may soon be all that is left of these extraordinary ecosystems. The Florida Department of Environmental Protection stated there was a 44% decline in coral cover from the years 1996-2005. Over 11 years have past and the issue has not gone away. In 2014, an additional five coral species were listed as “threatened” under the Endangered Species Act. Due to our addiction to fossil fuels and the carbon emissions that come with it, coral reefs have been devastated by rising ocean temperatures and increases in ocean acidity. The threats to coral reefs also come from boating, overfishing and tourism.

This is all very frightening, I understand its very easy to give up in times like these. Never forget that there is always hope. You can help end this destruction. You can send letters to state legislators and urge them to sign bills that work to promote clean, renewable sources of energy (wind, solar, wave) and to impose green taxes on polluting companies. If
you fish or boat, be sure to only catch non-endangered fish during proper seasons and follow all laws regarding speeds and docking. If you choose to tour these wonderful communities, be sure not to touch anything or cause any unnecessary turbidity with your flippers.
Together we can keep these beautiful, biodiverse communities from disappearing. Together we can keep our world from collapse❤