#the queen of nothing

jude: cardan can i ask for a favour

cardan: i would move heaven and earth for you, but continue

Jude and Cardan - The Cruel Prince

Everyone single person in Elfhame:

Jude and Cardan went from

This ↓ (the cruel prince)

To this ↓ (the wicked king)

To this ↓ (queen of nothing)

Talk about an enemies-to-lovers relationship development!

i will never get over these tfota parallels

jude at the beginning of tcp:

jude at the end of tqon:

so u’re telling me Jude found a paper on which Cardan write her name like a hundred times and decided “oh, it must be because he hates me.”????

To the High Queen of Elfhame

Above me is the same silvery moon that shines down on you. Looking at it makes me recall the glint of your blade pressed against my throat and other romantic moments. I do not know what keeps you from returning to the High Court – whether it is vexation with me, having spent time in the mortal world, you have come to believe that a life free of the Folk is better than one ruling over them. In my most wretched hours, I believe you will never come back. Why would you, save for your ambition? You have always known exactly what I am and seen all my failings, all my weaknesses and scars. I flattered myself that at moments you have feelings for me other than contempt, but even where that true, they would make but a thin gruel beside the feast of your other, great desires. And yet my heart is buried with you in the strange soil of the mortal world, as it was drowned with you in the cold waters of the Undersea. It was yours before I could admit it, and yours it shall ever remain.

Love how Cardan addressed her as the High Queen of Elfhame in this one but never once signed off as the High King of Elfhame. It was always just Cardan. Her husband. 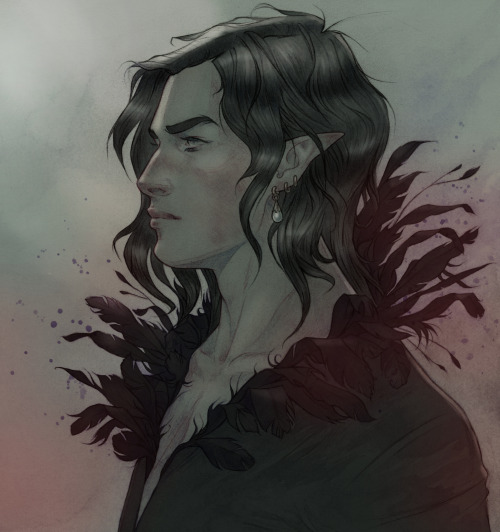 I couldn’t resist finishing this drawing of Cardan because I am in love with his outfit. Feathers are fabulous and  no one can convince me otherwise. I promise I’ll move on after this, though 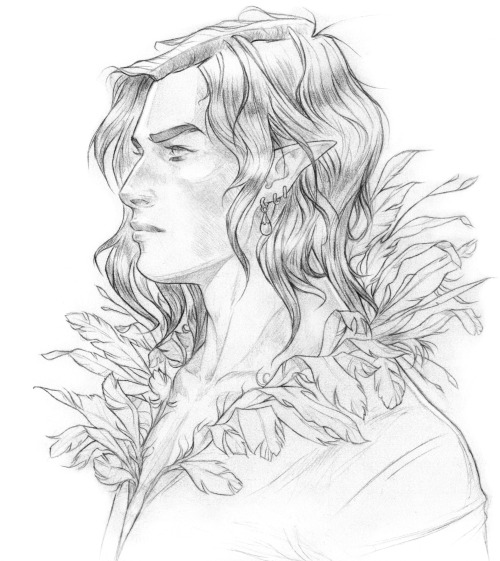 Stabbing is not okay Jude

Virtual signing of How The King of Elfhame Learned to Hate Stories!

Nothing fills Cardan with fear more

So like a lot of people, QoN was kind of up and down in quality for me. There were a lot of great moments, but also a lot of moments that didn’t quite land the way they should’ve. Since I’m an overthinking former English major with too much free time, I’ve figured out what exactly is missing in QoN that was there in CP and WK.

Here’s the issue: the emotional moments in QoN are not tied to the sexy moments the way they should be. What makes a sex scene (or make out scene) sexy? The physicality of the moment, sure. But also the emotional impact of the sex act for the characters. Anyone can have sex. Stick a penis in a vagina and boom, ya did it. But good book sex lands because it’s about the emotion in addition to the physical stuff.

What makes all the make out/hook up moments in CP and WK so damn sexy is that they aren’t just tied to emotion, they’re also tied to emotional revelation. In CP, Jude and Cardan’s epic first kiss is tied to the moment Jude first realizes that Cardan desires her. In WK, their hookup is tied to the moment when Jude finally acknowledges that she desires Cardan too. Yes, these scenes are all well-written and describe the physical aspects quite well, but that’s not what gets us all hot and bothered under the collar. It’s the pairing of the “oh shit he likes her” with the kissing and heavy petting.

I maintain that the single sexiest moment in the whole series is in WK, when Jude surprises Cardan in bed after she’s freed from the Undersea and he just drops this massive feelings bomb on her. They don’t even do anything physical beyond cuddle a little, but it’s sexy because the emotional revelation is through the fucking roof.

Which leaves us with QoN. It’s difficult to pinpoint one scene with a huge emotional revelation on par with WK because Jude and Cardan get interrupted constantly. Cardan mentions the missing letters, and then boom Jude’s kidnapped. Cardan rescues Jude, and then boom she’s off to rescue the Ghost. Cardan and Jude have an actual human conversation, and then boom they have to talk to the Council. They almost never get an uninterrupted scene, and it ruins the flow.

I suppose the big revelatory scene is when Cardan explains his true intentions behind Jude’s exile, and that she could have canceled the exile literally any time, and that he trusts her. This is the moment when they should have started making out like rabid rabbits. There’s the emotional revelation, so lets add the physical part, right? Except nope, they have to talk to the Council about boring plans and shit. By the time Cardan and Jude finally get to the horizontal naked dance, it’s dozens of pages later.

Their sex scene is fine for what it is, but it’s not tied to an emotional revelation anymore. We already know that Cardan wanted to do really kinky things with Jude, and we know he has a lot more respect for her now, so that’s not a big reveal. There’s no real emotional reveal and revelation in that scene, so the whole thing feels somewhat flat. Holly chose to save Cardan’s love confession until right before the confrontation with Madoc so that Jude could get all upset over Cardan possibly never knowing her true feelings. And I get that choice, from a plot perspective. Don’t spend your emotional currency all at once. But honestly, Cardan confessing his love to Jude should have been paired with the sex scene, because then we get that lovely emotional revelation kick. They wouldn’t just be having sex because they find each other hot, they would be making love over an emotional connection.

QoN is what it is, for better or worse. It’s not a bad book, but it misses delivering the same punches that CP and WK delivered so well.

WHEN DID JUDE GET NIGHTFELL BACK??

So in the released Novl QoN excerpt, Jude mentions wishing she could have brought Nightfell with her to the Grima Mog duel:

“I draw the long knife I have hidden in my boot. It doesn’t have the best reach, but I don’t have the ability to glamour things; I can’t very well ride my bike around with Nightfell on my back.“

But here’s the last time we see Nightfell in WK, right before Jude escape’s Madoc’s house arrest by jumping out the window:

Once she is gone and the tea is cold, I climb the steps to my room. There, I take up Taryn’s knife and the other one hidden under my bed. I take the edge of one to the pocket of my dress, slicing through it so I can strap the knife to my thigh and draw it swiftly. There are plenty of weapons in Madoc’s house—including my own Nightfell—but if I start looking for them and belting them on properly, the guards are sure to notice. I need them to believe I have gone docilely back to bed.

Later, when dueling with Balekin, Jude spares a moment to regret not grabbing Nightfell:

I’d rather have the knife than be unarmed, but more than anything, I wish I had Nightfell.

So Jude leaves Nightfell at Madoc’s house after she is returned from the Undersea, and she does not ever get the chance to get it back before she’s exiled. She literally gets dumped on the sidewalk of a random Maine town with no time to pack her bags at all. So it stands to reason that Nightfell would still be sitting at Madoc’s house, unless Madoc or Taryn grabbed it before leaving to start the coup.

So how does Jude have Nightfell sitting in Vivi’s apartment in Chapter 2?

I literally don’t know, you guys. Open to theories and ideas.

Spoilers for the released QoN excerpt.

Jude is going to steal Madoc’s red cap, isn’t she?

Like, there’s literally no other reason for her to go on about stealing Grima Mog’s cap in Chapter 2 and how important that cap is to a redcap, unless it’s foreshadowing.

Back in The Wicked King chapter 1, Jude goes on and on about how faerie marriage and specifically royal marriage works, in the context of Mother Marrow’s sneak engagement attempt. So of course at the end of the book, when Jude and Cardan get married, we already know how that works because it’s been set up from the start. Not the most subtle foreshadowing tbh, but whatevs.

Holly tends to reuse certain structural and narrative tools (I’m looking at you, Mr. Everything Goes to SHIT at the ¾ Point), so it stands to reason she’s pulling the same stunt here.

Damn straight you’re going to make a proposal. The foreshadowing in this series is insane.

Y’all know we’re less than 100 people away from another out of context Queen of Nothing quote, right?